The popular Christmas song, Ukrainian Bell Carol, was adapted by the Ukrainian composer, Mykola Leontovych, from a Ukrainian folk song.  It premiered in the United States in 1922 at Carnegie Hall to an enthusiastic audience.  The words for the Christmas song, I Heard the Bells on Christmas Day, are based on a poem by Longfellow, where he tells of his despair on hearing the Christmas Bells during the Civil War where “hate is strong,”  but ends with the bells carrying to him a message of renewed hope for peace among men.  Longfellow’s poem was set to music in 1872 by the English organist, John Baptiste Calkin.  In this  Bells of Christmas arrangement, Harp 1 and Harp 2 have several lever or pedal changes that are not difficult, while Harp 3 does not have any chromatic changes.  Performance time for Bells of Christmas is about three minutes.

The arrangement comes with separate copies for First Harp, Second Harp, and Third Harp and an Ensemble Copy showing the three parts together. 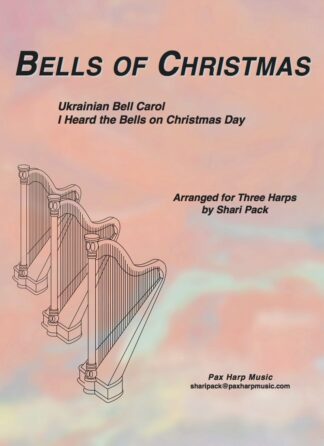