View cart “Tinsley Treasures, Volume III” has been added to your cart.

Charlotte Laughton Tinsley, 1910-1998, played and taught harp in California and was active in the music world there.  For instance in 1946 she appeared with Spike Jones and his Other Orchestra in Hollywood and in 1954 she played harp in screen music for Land of the Pharaohs and The Silver Chalice.  She also played and made recordings with Anthony Galla-Rini, the celebrated American accordionist.  Shortly after her death, we purchased her harps and a box of her manuscript compositions.  We would like now to make these excellent pieces available to other harpists.﻿ 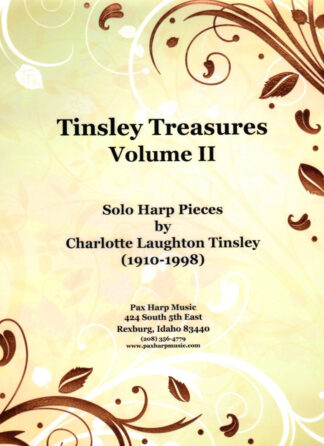